If you could go to Mars in 39 days and return in the same amount of time, would you go? I would. The opportunity for someone, someday to do just that became a step closer to reality today, with the successful launch, orbit, re-entry, and recovery of the SpaceX Dragon spaceship. 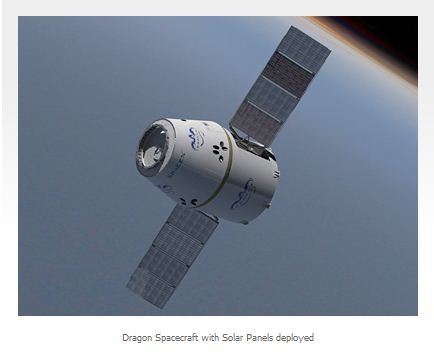 But, SpaceX and Dragon are aimed at Earth orbit operations, not Mars, and so how are the two destinations connected?

First, SpaceX, the company founded by Elon Musk, made history yesterday and today, as indicated in their press release:

“SpaceX launched its Dragon spacecraft into low-Earth orbit atop a Falcon 9 rocket at 10:43 AM EST from Launch Complex 40 at the Air Force Station at Cape Canaveral.

“The Dragon spacecraft orbited the Earth at speeds greater than 17,000 miles per hour, reentered the Earth’s atmosphere, and landed in the Pacific Ocean shortly after 2:00 PM EST.

“This marks the first time a commercial company has successfully recovered a spacecraft reentering from low-Earth orbit. It is a feat performed by only six nations or government agencies: the United States, Russia, China, Japan, India, and the European Space Agency.”

You can see more on the story here.

If we dig deeper we find that this launch program was supported though not fully paid for by NASA. NASA’s hope and plan is to turn the low-earth orbit business over to private companies like SpaceX, and thus free up NASA’s limited resources to concentrate on missions to far away destinations, like Mars.

That is where another private company comes in, AdAstra Rocket Company (AARC), whose CEO is former astronaut Franklin Chang Diaz. This company is also working with NASA, to develop the Vasimr plasma engine. Such an engine will use a small nuclear reactor to generate electricity, which in turn transforms hydrogen gas into plasma, generating a thrust level capable of speeds sufficient to get to Mars in 39 days. This is in contrast to the current journey of about two years for the round trip and even that requires selecting a very limited launch window that come around only every 25 months. Prototypes of the Vasimr engine have been successfully fired on earth, and AARC plans a test in space at the Space Station in the coming years in hopes of being operational by 2020.

Obviously, then, SpaceX becomes critical in ferrying people and materials into orbit for such testing, so that trips to Mars become feasible.

And, in fact about three years ago at a Future In Review conference I attended a small seminar with Elon Musk of SpaceX, where he described his own dreams of travel to Mars, in a way that was inspiring and confident. Musk said he expected people to be traveling to Mars by 2030, and I certainly hope he was right.