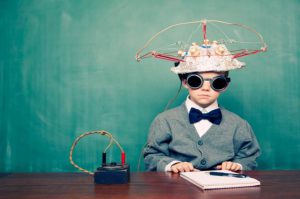 The most recent edition of The Futurist magazine included The Best Predictions of 2011. Here are some that seem stranger to us than the others.

1. Thought Helmets. According to Gerwin Schalk, an Albany Medical College scientist, by the year 2020 we will have thought helmets. Though these helmets will probably not be for commercial use right away, Schalk is sure that at least “Soldiers will communicate with telepathic helmets.” It will be very interesting to see how these actually work. Once the technology is even more advanced will it be embedded into our brains so everyone can communicate without speaking?

2. Sleep learning. Great news! By 2030 you will apparently be able to study in your sleep! But, only at select locations. “Hotels will offer customers a selection of dreams as well as the opportunity to study and learn while they sleep.” It would be interesting to ask the Futurist who predicted this a few questions, such as: Will you be able to study any topic? Who will decide which topics (committing the perfect crime, kidnapping for dummies) are off limits to study?

3. No more days off. Bad news for students who love snow days. In the future “Schools won’t have days off for inclement weather anymore”. The idea is that all students will have access to internet and be able to attend class online. Is it plausible that all students will have web access and own a web-enabled device? Perhaps. But then again every young student who wants to take a day off to play in the snow will find a way to get around the rules by using any number of excuses that the school can’t necessarily check up on. How are you supposed to track every student who says it snowed so hard that their electricity went out?

4. Empty Oceans. By 2050 “Ocean-dwelling plant and animal species will disappear on a scale equal to the five great global extinctions of the past 600 million years,” according to the International Programme on the State of the Ocean. This pessimistic prediction assumes that people will stop taking action to mitigate greenhouse-gas emissions and continue to destroy the ocean. There is no doubt that the world needs to pay attention to creating a more sustainable planet, but predicting such a widespread extinction happening in the next 39 years is pushing the boundaries of plausibility. Needless to say, it wouldn’t hurt to start preserving what we have before it’s too late.

5. Holograms for everyone! By 2022 “Home entertainment centers could be playing movies and television shows as 3-D holographs, no television screen involved.” The components of 3-D Holographic technology have been around for a long time and have recently made some great improvements, but to get holographic products that are commercially usable in the next 11 years is going to be quite the challenge. Why? The issue is with finding more sensitive film. Film has been around since before 1890. Less than 35 years later, in 1922, we had the earliest confirmed 3-D film shown to an audience. Holography was invented 25 years later in 1947. Our technology is vastly more advanced now than in the early 1900s, yet it only took a span of 60 years to invent film, make it 3D and turn objects into holographic images. Now, more than 60 years later we have even better technology and 3-D holographic shows and movies are still just beyond our grasp (commercially). Judging by the numbers, we are long overdue for this prediction to come true.