Beyond 2020: A Nebraska Chamber Keynote

This week I had the privilege of delivering the keynote speech to the annual dinner of the Grand Island, Nebraska Chamber of Commerce. I shared the stage with Nebraska Governor Dave Heineman, who greeting the packed house, along with the many winners of annual Chamber awards. 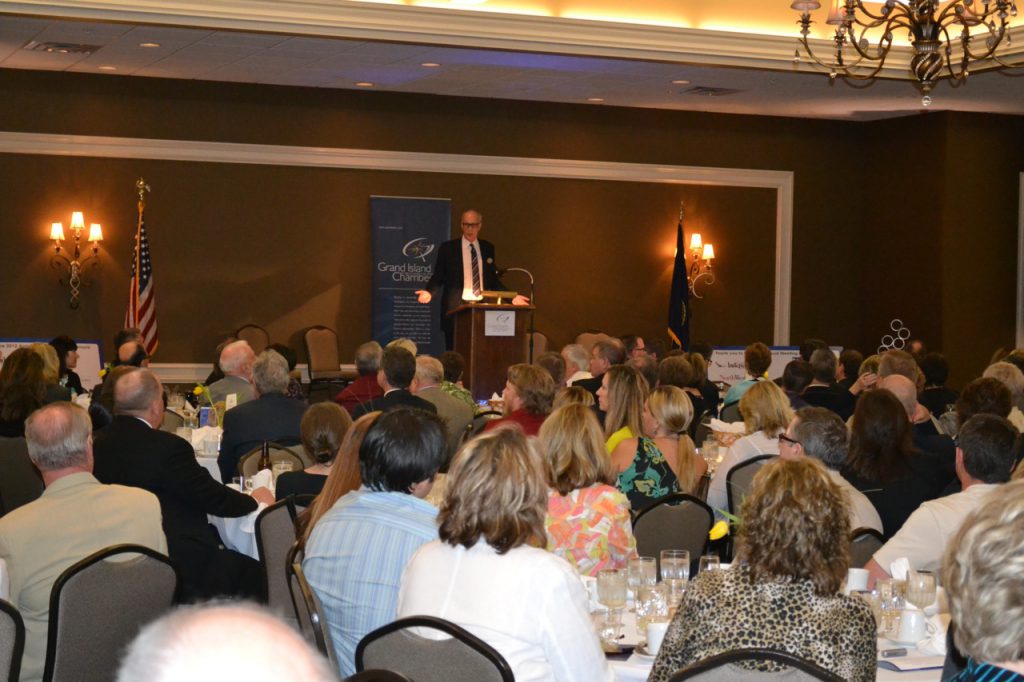 I was thoroughly charmed by the success story of Grand Island, a community of 50,000 in the heart of Nebraska, as well the state success story. Nebraska has weathered the economic downturn in good shape, and has half the unemployment rate as the rest of the nation, at 4%. The state economic performance is better than the nation’s in a variety of economic indicators, including retail sales and growth in exports of goods. Grand Island went after the Nebraska State Fair when it decided to relocate from the state capital of Lincoln a couple of years ago, and now enjoys a beautiful new fairgrounds development. As Governor Heineman said in his remarks, this does not happen by accident.

Picking up on that thought, I opened my keynote speech with my favorite concept, that the future is not something that just happens to us, but rather is something we do. I had decided in this talk to begin with some history, setting the stage with stories of the techno-social-economic revolution of 1900-1930, and comparing that to our own time. Mostly I wanted to get to an important quote from the American industrialist Henry Ford, who said,

There is one rule for the industrialist and that is: Make the best quality of goods possible at the lowest cost possible, paying the highest wages possible.

I asked if we are forgetting the third of Henry’s three principles, and illustrated the question with this disturbing chart (Hamilton Project) of annual employment and earnings of American men with a high school diploma only, from 1970 to 2010. What the chart shows is that, in 2010 dollars, such a man earns only half of what he earned in 1970 ($26,000 versus $48,000) and is much less likely to actually have a job. We are moving in the wrong direction.

Having set the stage with some historical perspective, I turned to future trends. Here I outlined six converging forces that shape the future and collectively offer more opportunity to shape a positive future than they do challenges to the future. The forces are:

In that final point I circled back to the beginning. I shared the now classic chart from the Congressional Budget Office illustrating the income growth of the 1% versus the income stagnation of the bottom 80% since 1979, warning that many people get upset by this discussion. But I argued that by focusing on the 1% we have focused on the wrong thing. The great future challenge is how to reverse the stagnation of the bottom 80%, and get their income back on a growth curve. This is not easy in world of global labor competition, but that is what we need to figure out how to do. I concluded with a core strategy for changing this downward slide, and that is preparing for the knowledge value economy, which thus requires educating millions of young people at a much higher level.

It was a positive evening with a great group of people, and I enjoyed this speaking opportunity as much as any in recent years.

You can review the mostly pictorial slides that I used below, from Slide Share.