The future of Work and BYOD and BYOM

[Last month I had the opportunity to help with the creation of a video for Cisco, in which Cisco futurist David Evans, futurist Stowe Boyd, and I talked about the future of the workplace as the availability of personal communication devices becomes more pervasive, their power greater, and their use more natural and integrated into every day life. The recent workplace phenomenon of a desire to “bring your own device” is a key indicator of this trend. At the same time that I was shooting that video (we hope to post it before too long from now), I was producing a guest blog for Cornerstone OnDemand, the human resources support company, commenting on their recent study on the future of the workplace and the workforce. Here is the blog I wrote for them, re-posted here by permission, which captures some observations where BYOD is going in the future.]

BYOD, BYOM, and the future of work
The other day I was with a team from a large multinational company. The team was preparing a presentation for the executive committee, and one of the team members proposed using a presentation tool he liked and was good with. But the other team members pointed out that the tool was an online application, and not formally approved by IT, and so it would be unwise to use it for the executive briefing.

This incident is something seemingly normal that occurs every day in the workplace – yet it is the perfect example of employees’ desires to bring their own device (BYOD), bring their own applications (BYOA) and bring their own tech (BYOT) to work to help with their productivity. The willingness of employees to do this was confirmed in the recent study of American workers conducted by Cornerstone OnDemand. The survey found that 37 percent of employees who currently use apps for work would be likely to spend their own money on work-related apps in the next twelve months if they felt the app would help them with their job. Even among employees who do not currently use apps for work, 20 percent expected to spend their own money for apps to increase their productivity.

In a world with thousands and thousands of apps available and new ones appearing each day, it is important for organizations to develop a policy on the use of apps and devices by individual employees. Generally, the advice is to make this policy one of openness to employee devices and apps. But the Cornerstone study reveals that many companies have yet to address this pressing issue.

When asked if their employers had policies on using applications for work purposes that are not provided by the employer, 43 percent said no, and 21 percent said they did not know.

What kinds of applications are employees interested in? Here are the numbers: 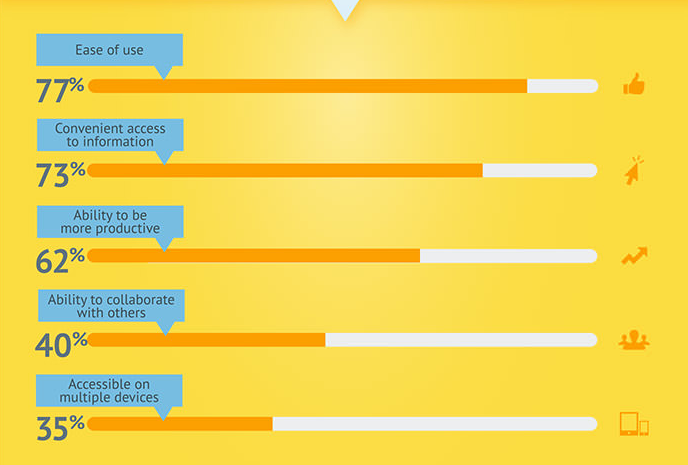 Now, an IT department could try to provide all of this, but they will never keep up with the flood of apps developed by entrepreneurs. So what is an IT department to do? I’d suggest that they begin the difficult process of redefining their role to providing a basic information access infrastructure, security standards and applications, and then, like the maestro of an orchestra, letting the individual artists show their stuff.

There are, in fact, companies who are allotting each employee a budget to buying technology and then not dictating what the specific tech should be. This is radical I know, but consider the dominant trends shaping the future of work.

BYOD + BYOA + BYOT = BYOM
Internet anthropologist and futurist Stowe Boyd, for example, suggests that first, every job is digital, second that every company is digital, and third that more and more functions can be performed by third parties. But the most important trend that Boyd cites is this: what is really happening with BYOD, BYOA and BYOT is that people want to bring their own mind to work. He calls it BYOM. Think about this. Our personal devices and the apps we favor have become a part of how we live, how we produce, how we think. Perhaps your essential app is one that keeps track of your travel, or tracks your exercise and diet in concert with your wristband, or enables you to conduct your banking anywhere, anytime. And this is not to mention the obvious apps that keep you in touch with your network and up to date, all the time. What the Cornerstone OnDemand study is saying, I believe, is that people want to bring not just their tech to work, but themselves.

On the Horizon
What is next? On the horizon and just coming into the marketplace are wearable devices. Google Glass is perhaps best known, as an example of augmented reality in which you wear a device that keeps you constantly imbedded in the virtual world even as you interact with the physical world. Joining Glass will be smartwatches that connect you to the Web, clothing, and, before long, smart jewelry and buttons that enable you to live in a world where the virtual and the physical are fully merged. The recent hiring of Burberry’s CEO by Apple is further demonstration of the intersection of fashion and tech. Why would you use such things? To see company information on demand, to access repair manuals, to connect to team members, to do things we do now with the devices we carry. The Cornerstone OnDemand study found that 66 percent of Millennial workers and 58 percent of all employees would use wearable technology if it enabled them to do their job better. If they saw a co-worker using wearable technology, 67 percent would feel curious and 12 percent would feel at a disadvantage.

I remember being at a conference this year of companies in a service-providing industry. A member of the Millennial generation gave a short presentation showing how he imagined their service professionals would use wearable technology in the near future, and he challenged the more traditional thinkers to open their minds to a new way of working. He was living proof of someone who wanted to BYOM to work. Smart companies will be moving in this direction.