It looks now, about mid-day Pacific time on September 25 that a deal is either concluded or nearly so for Washington DC to provide the $700 billion or more in relief that Wall Street apparently needs to sustain liquidity and keep the economy going. Arguments still rage about whether this is a good idea, a bail out or not a bail out, just a downpayment on a much large sum, or indeed whether a crisis is imminent. No matter. The deal is nearly done.

What might be useful is to examine for a moment one of the most significant of the underlying dynamics of the housing market in the U.S., dynamics that will not be changed in the least by this deal. The dynamic is the mismatch between the homes that are built and the ability of people to actually afford them.

Consider the following three stories. A couple of weeks ago I was in Bend, Oregon to deliver a keynote speech as a futurist speaker to the Oregon Bar Association. While in Bend, I noted in the local paper the Bend Bulletin a headline, “Homeless student numbers increase.” (Sep. 11, 2008, page C1, online only by subscription) It turns out that in Oregon there were 15,859 homeless public school students in 2007-2008, and the number will be up this year. Over the past five years the state has seen a 93% increase in homeless students. They live in cars, outdoors, in motels, or shelters, for the most part.

It is obvious why this would be happening, but startling none-the-less. The second story appeared in the Seattle papers, regarding a new homeless tent encampment called by its organizers “Nicklesville” after the Seattle mayor. It should be noted that this is an unfair slam on Mayor Nickles, as Seattle is fairly attentive to the homeless problem, though overwhelmed by it.

Obviously the camp is a play on the Hoovervilles of the depression. Their intent was indeed to evoke that memory, and to actually prepare for a larger need. Though Seattle and surrounding suburban towns actually support an official tent city, in this case the city of Seattle issued eviction notices yesterday, and the village is supposed to come down on Friday, September 26.

Finally, take a look at this house, for sale not far from where I live. 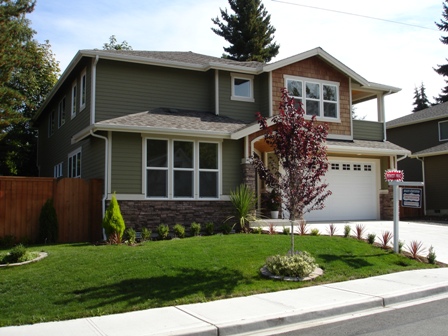 This very nice house, which we have toured, went on sale about two years ago, at $899,950. Currently it is listed at $799,000. The developer-builder faithfully cuts the lawn, holds an open house (he acts as his own realtor) every other weekend or so, and still no buyer. Thus has been born a new category in real estate, the “Never Sold House,” a term I believe I first heard used by James Howard Kunstler. The house is 3200 square feet, large but not huge by modern standards, 4 bedrooms, lovely finish work.

In these three stories we see exhibited a powerful underlying dynamic which, if not changed, will continue to be a huge problem. We have lots and lots of people who need homes. And for years we have had, and continue to have builders and developers building homes which are mostly too large and too expensive for the vast majority of the population to buy. The creative financing of the past several years was not so much a way to help home buyers as it was a way to help developers clear too much inventory of too expensive homes. And it all came crashing down.

The countryside is dotted with Never Sold homes just like these. One study I saw suggest there may be a surplus of as many as 20 million of these homes in a decade and a half, homes too big and too expensive for a population that will not want them and does not need them.

This is a real problem for the future.