The Future of Jobs

Today in the U.S. we received bad news regarding employment, as the number of new jobs created in the past month fell, after several months of relatively robust gains. While one month does not make a new trend, the news has shaken the markets as they fear a slide backward into higher unemployment rather than a continuation of the long slog out of the deep recession. The website, Calculated Risk, has been keeping track of how the U.S. job picture compares in this recovery to past recessions, and the chart below illustrates how challenging it has been. What is going on? One issue is that interventions to stimulate the economy have been too small, and now, in a spooky repeat of 1937, the U.S. Congress has decided to focus away from jobs and toward austerity. At the same time, however, something deeper may be going on as well, a change in the nature of work itself. Follow me below the chart.

From Calculated Risk: Job Losses and Recovery Across U.S. Recessions 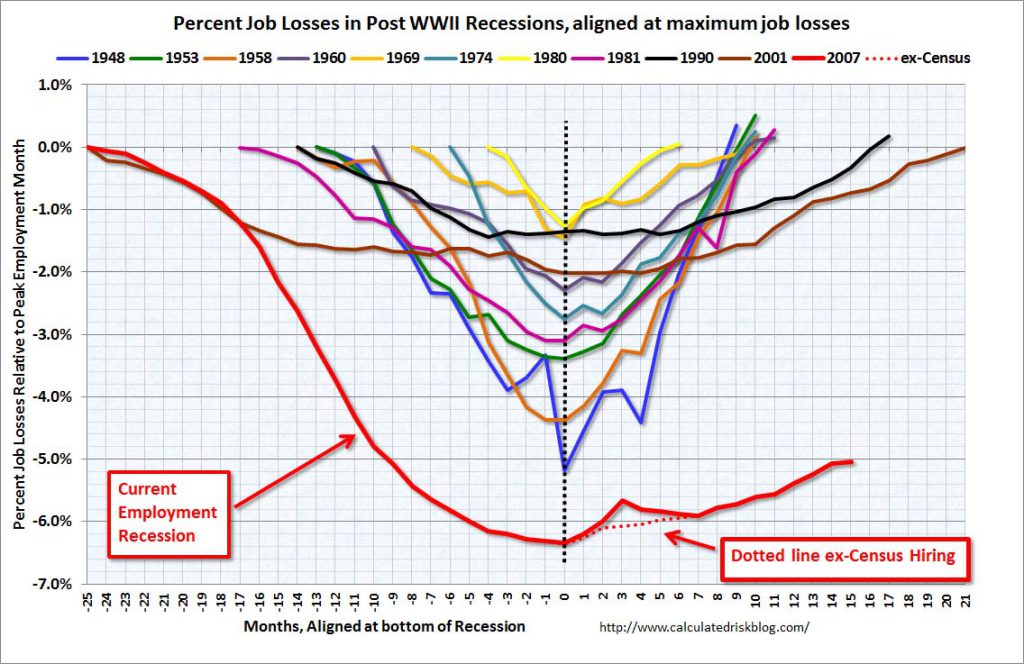 So, the question is, is something deeper at play that a mere recovery from recession? Recently I was asked by a publication in Sydney, Australia called HR Leader to write a short piece on the future of work. You can link to the article here, in the May 2011 issue. And, below is what I had to say about the changing nature of work itself.

“Daddy, what’s a job?”– The future of employment

In the future, people will work “stint rather than jobs”, writes Glen Hiemstra

There was a time in history when no one had a job as we think of it. It was only in the last century that the modern concept of a job as work exchanged for wages and benefits was invented.

In the past three decades the social and economic fabric that created this employment system has frayed and now is rending before our eyes. Around the world floods of young people face economies in which there may never be a sufficient number of jobs by the standard definition. In older industrialised nations the ability of employers to pay both good wages and benefits is increasingly challenged. Employment has gone completely global. The acceleration of technology has meant that fewer people are required for many tasks.

So what will become of employment in the next twenty to fifty years? Any quick search will offer lists of exotic-sounding jobs of the future – gene pharmers, space tour guides, body part makers, Hollywood holographers, and the like. Such lists are entertaining. They may even be accurate. But they miss the deeper story of the future of employment.

In the real future you will be working at a stint rather than a job. To work at a stint is to become part of a project team for 18 months, followed by joining three friends doing a start-up business that folds after two years, after which you sign on with a multinational which disappears in a merger…and the beat goes on. This requires a reinvention of the social contract around security and benefits.

Since you have become a stint worker, you will have shifted from being an employee to being a free agent. This will not be new, as increasing numbers of us are already free agents in 2011, but for most of us it requires a change in perspective. The biggest change involves learning how to think of your self as a company of one.

The most profound shift may be the disappearance of employers as we have known them, as they are replaced by amoeba-like networks that come together to complete certain projects and tasks. Consider a feature film production. The project is conceived, some key people flesh out a proposal, funding is arranged, a global network of talent is hired, they work together for weeks or months, and then disband, never to work in that exact combination again.

Obviously there will remain many exceptions to this enterprise model. The corner grocer, the local coffee house, the dry-cleaning store down the street will likely continue to be small and stable, with fixed employees, though even these employees will likely be free agents working on a stint.

The places that we work will change, especially for knowledge workers – those of us who commute to offices today mostly to sit and type words on machines, look at computer screens, and talk to other people in person and by phone. Tomorrow’s machines will make today’s computing and communication look primitive, as they enable full 3-D, immersive and visual interaction with others in real time wherever you are. Data and information will be in the Cloud – available everywhere, all the time. Thus, we will come to the office only when it is really desirable to get together. The offices themselves will consist of inviting meeting and collaboration spaces, and “hotelâ€ stations for free agents to plug in. The typical company may use half the office footprint it uses today for the same number of people.

By 2050 a surprising amount of work will be done directly by intelligent machines. Think of how certain jobs have become similar around the world, using the same technologies, processes, designs and so on. Consider engineering, construction, manufacturing, transportation, wholesale and retail services, even hotel and restaurant work. Watch a re-run of the IBM computer “Watson winning the TV game show “Jeopardy the week of 14 February 2011. Imagine this machine with 20 years more learning, add in improved vision and better dexterity for robots, and with the right economic scenario it is easy to imagine literally millions of jobs currently performed by humans being done completely by machines.

In such a world where fewer people are needed to produce all required goods and services, what will people do? The answer may be surprising – replace technology with a world made by hand. More people, rather than fewer, will be working the land by hand, making things by hand, teaching and entertaining others in person. Many people will work in this way by choice as a counter-weight to an overly technological world. It is even possible that, in one particular economic and energy future where the global economy retracts drastically in the face of energy shortages and climate change catastrophes, work will become more human-centered and less technological by necessity rather than choice.

Whichever future emerges, employment of tomorrow will differ from the jobs of today.