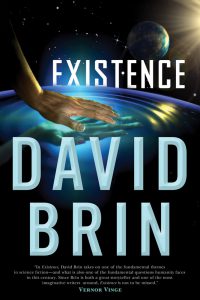 I am both a futurist and a science fiction writer. One of the people who most exemplifies the power of that combination is David Brin, who wrote the prescient non-fiction book The Transparent Society. I visit his blog from time to time, and regularly find him one of the people who can say things that change how I see the world. David is also one of my favorite fiction writers. Since he has a new book out this week, I asked him for an interview. Here it is…

I’ve been looking forward to a new book from you. I haven’t been able to read Existence yet, although I’ve ordered it. I just finished watching the vivid trailer on YouTube, and I’ve heard you talk about the book online. Here are a few questions about Existence…

You and I are both members of The Lifeboat Foundation, which looks at threats to our future as a race. How did that membership affect this book?

Existence is set in the 2050 time frame as we’re all coming to terms with the fragility of our continuity as a species. The Lifeboat Foundation – which examines and ranks as many threats to human success as it can find – was a big help and I portray it still performing this task, a generation from now. After all, what better service can science – and science fiction – perform than to poke sticks into the unknown territory ahead of us, probing for the quicksand and land mines? The mistakes that might bring our Great Experiment to an end?

For dramatic effect, of course, nothing can beat an alien artifact whose hints and warnings and lures may be meant to help or hinder… or else manipulate… our search for solutions.

There are significant problems that we must overcome in order to continue to thrive as a species. Can you talk about one of those that shows up in the book, and what it looks like in 2050?

Running alongside the main plot – (filled with action and suspense and interesting characters!) – are extracts from mass media in 2050, including snippets from “Pandora’s Cornucopia”… an epibook cataloguing all the ways we might do ourselves in… and listing some of the things that we’ve done right

In fact, we’ve accomplished many, evading some of the pitfalls that may have prevented other sapient races from filling the galaxy. Avoiding nuclear war. Reducing the general levels of violence and oppression. Resolving a few (not all) of our complex issues learning how to manage a planetary ecosystem. By the time Existence is set, we’ve done so well that Earth is only experiencing a medium scale mass extinction, and not the dinosaur-level event that some expect!

And yet, as our sophistication rises and our computers and artificial intelligence burgeon, we grow capable of modeling how difficult is the task that remains. It may be that the so-called Fermi Paradox has a simple explanation. Why does the galaxy show no signs of interstellar culture? Because, it’s terribly hard to rise that high. And perhaps no one has yet solved the riddle of existence.

Your book is set in 2050. Tell me something hopeful about that time.

Citizen power. One of the major themes I spoke about in The Postman and in Earth… and in my nonfiction tome, The Transparent Society. Often missed from discussion of events like 9/11 was how crucial is was that average people behaved so well, that day. Not panicking even slightly and performing countless ad hoc tasks admirably. Here that theme reaches its culmination. In fact, you can try a free sample short story – “The Smartest Mob” – that stands just fine by itself, illustrating where I think individual and self-organizing acting will go, what it might achieve by 2050, as a lone reporter calls for help across the hyper-smart WorldMesh. http://www.davidbrin.com/existence.html

Here at dothefuture.com, we highlight work going on to create a positive future. What active research or science do you know of that might help us avoid the future you’re depicting in Existence?

Find ways to persuade citizens of the West to abandon the trap of Culture War and instead go back to fair, respectful argument. Even pragmatic negotiation with our neighbors. If we re-discover our knack for practical dickering and working out mixed solutions, then perhaps the West won’t decline, after all!

What was the hardest part to get right?

Always – making aliens seem plausible. And catching just the right tone for characters living in a near future that is both very different from our time, and yet strangely unchanged. Just the way 2012 would surprise any person brought forward from 1967. Half the time she would say: “Wow! We never thought of that!” And the other half? “You mean you future folks are STILL doing THAT?”

—What was the most fun about writing the book?

The very same things. What makes peering into tomorrow hard is all the same traits that make it so much fun to do. It’s why I keep coming back, trying to see a little better.

Will you be in the Seattle area as part of your book promotion?

On July 5 I’ll be signing at 7:00PM at the Elliott Bay Book Store in Seattle, then I’ll spend much of the weekend at “Westercon” – the West Coast Science Fiction Convention at the DoubleTree by Seattle Airport.

There will also be appearances in Portland, LA, Pasadena and the San Francisco Bay area. People can see more at http://www.davidbrin.com

Thanks for chatting with me Brenda!

Brief bio of David: David Brin is a scientist, technology speaker, and author. His new novel from Tor Books is Existence. A film by Kevin Costner was based on The Postman. His fifteen novels, including New York Times Bestsellers, have been translated into more than twenty language. Earth, foreshadowed global warming, cyberwarfare and the world wide web. David appears frequently on shows such as Nova and is in demand as a speaker about future trends. His non-fiction book — The Transparent Society: Will Technology Make Us Choose Between Freedom and Privacy? — won the Freedom of Speech Award of the American Library Association. http://www.davidbrin.com/existence.htm